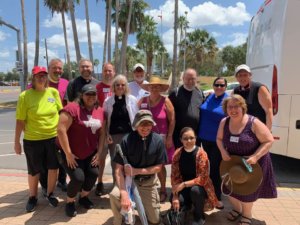 The NT-NL pastors and leaders who attended Courts and Ports

Where does one begin to tell about an experience that was profoundly moving, that has deeply angered me, and has left me with feelings of utter despair?  I know I cannot remain silent, but how do you even attempt to tell the story?

In this case, I’m going to begin with the stories of the people we met last week during the Texas Impact Courts & Ports experience.  It was an intensive couple of days spent in McAllen and at the border in Brownsville to learn about the process of seeking legal asylum and meeting some asylum seekers to hear their stories.  They are trying to do everything the legal way but the legal way is broken.

While I could begin with the process and how terribly messed up it is, I think the best way to draw people in enough to care is to start with those stories.  The process will come in another blog post.  I will be inserting some photos (courtesy of Austin Nickel, who took much better photos than I did,) but none of the actual families we met.  We were told not to take pictures that included faces because it would endanger the families because members of the cartel (who are an ever-present danger) troll social media to figure out who to target.  We were also told not to give them money because that also would make them targets of the cartel. 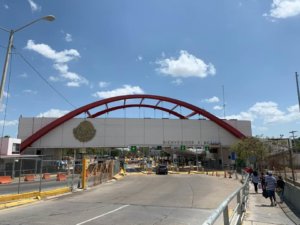 As we crossed into Matamoros, our group of 80 or so broke up into 10 groups to wander and meet families who are living on the streets.  We also were told not to go too far or we would become targets ourselves.  Our group was made up of almost all NT-NL folks, including Bishop Gronberg and DEM Irma Banales.  We did wander further than any of the other groups but always in sight of the Gateway bridge. 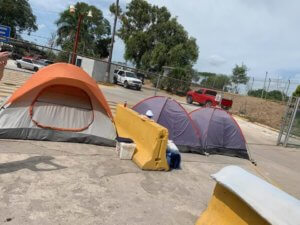 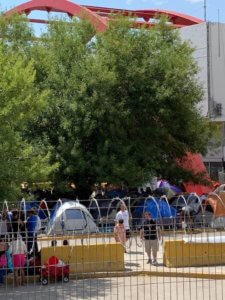 The first thing we encountered was dozens of tents, which serve as shelters for these asylum seekers.  These are their “homes” while they are stuck here in limbo.  None of these families are from Mexico, yet they are returned to Mexico under the “Migrant Protection Policy” which does anything but protect them.  Basically it just says that those who apply for legal asylum are returned to Mexico until their case for asylum can be heard and proved.  (But that is for the process blog later.)  These families have struggled for months to make it to this border from Nicaragua, El Salvador, Honduras, and Cuba mostly.  They now have no money to return home and no way to earn a living here in Mexico, and constant roadblocks to the asylum they seek. 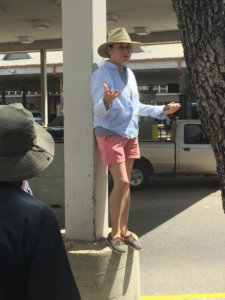 One of the Angry Tias and Abuelas

In the meantime, they live in tents and on the streets, dependent upon the generosity of people like the Angry Tias and Abuelas – a group of women who decided they could not stand idly by.  They take food across the border every day to feed hundreds of people, they take clothes and diapers and books, they bring people to give legal advice, and they hold classes for the children.  These women are amazing examples of humanity!

We wandered to a group of families gathered under a tree with some hammocks and a couple of tents.  They all had small children, including a few toddlers and babies.  We were helped in our efforts to hear their stories by a young woman who is a photojournalist, who has embedded herself with these families at great risk to herself.  She is a free-lance photographer who is also determined to be a witness to what is happening at the border.  Thankfully she also has an awareness of who the cartel members are, and was able to warn some in our group when it was wise to move on as a couple of them were moving in.

The families we met came from Nicaragua, El Salvador, and Honduras.  All were fleeing violence and tremendous threats to their lives back in their homeland. All of them paid thousands of dollars to the cartel and “coyotes” to get them here – everything they had. 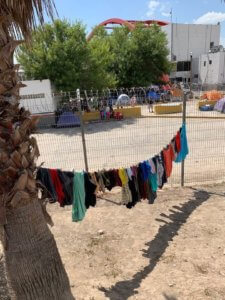 The family from Honduras had been living a comfortable life there as business owners with a young son (about 6 or 7 years old) in private school.  But the cartel kept putting more and more pressure on them to have their young son sell drugs for them in his school, and as the threats grew more and more hostile, they chose to seek a new life where they thought it would be safer.  They paid $6000 to get to the mainland, and another $12,000 to get to the US border.  Now they had nothing left, and no options before them.

The family from El Salvador was a Mom & Dad and a little girl (about 5?).  They were fleeing from the threats from a corrupt police department in their home.  After paying $8000 to get their family passage to the border (riding in the back of an overloaded semi-truck,) they also now had no money left to get back.

There was a woman from Nicaragua who was by herself as her oldest son had made it across the border to join family already living in the US.  She had been turned away without asylum and was afraid to try again for fear she would endanger her son’s ability to stay in the US.  She wished she could return home to her young daughter that she had left in the care of her sister, but again had no money to get back. 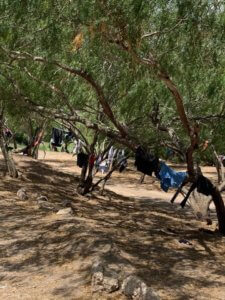 All of the groups heard similar stories.  Some of these asylum seekers had been in detention in the US for a few days and while those conditions were terrible, at least they felt safe there.  Many of them have now been here on the border for months. Here in the streets of Matamoros, the cartel is constantly harassing them and encouraging the women and children to “work” for them.  Or they’re being kidnapped on their way to their scheduled hearings in attempts to coerce more money out of their families.  Or they’re being beaten and raped.

They have to pay to charge cell phones that they have brought with them from their homes.  They have to pay to take showers or do laundry so they frequently just use water from the parasite ridden river (which means many of these children have rashes and illnesses.)  They even have to pay to use toilets, so most use an area on a hill that has been designated as the public toilet area – leaving everyone vulnerable to the problems that come with exposed human waste. 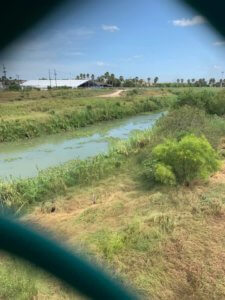 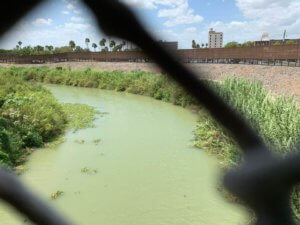 This river, gross and disgusting and surrounded by yet another wall and barbed wire, is what is between them and the perceived freedom from fear that they hope for.  But every part of this river is “owned” by the cartel and attempts to cross are expensive and often deadly.

We heard stories of teenagers forced to join gangs and kill family members as “initiation.”  We heard about children beaten to death with photos sent to parents threatening to do the same thing to their remaining children.  We heard a voice mail left for one of the attorneys just a day or two before she came to speak to us.  In that, we heard an anguished, terrified woman crying out for someone to help as they were going to die there.  She was in a shelter in Mexico, and behind her voice we heard endless gunfire.

While I don’t know the answers to how we can fix this system, we cannot sit back and do nothing.