The assassination of Martin Luther King, Jr. occurred 9 years and 58 days before my birth. As a result, by the time I came into conscious understanding about the realities of systemic racism in our communities, understanding why some folks wouldn’t want their kids going to my elementary school (where I was one of only a couple white children), MLK had become an icon. Larger than life. Streets were named for him and most states (Arizona being a notable exception until the NFL pulled the 1992 Super Bowl) had MLK Day holidays.

At that point King was no longer a man who lived but a martyr whose legacy and history of his legacy were quickly becoming sanitized. Quickly we forgot how controversial King was. How he lambasted the liberals and moderates in his “Letter from Birmingham Jail.” How many didn’t want him to come to Memphis. How many never wanted him to be in Dallas or Fort Worth. We gave credit to but forgot the risks that our first NT-NL Bishop, the Rev. Mark Herbener, took when he was pastor at Mt. Olive, Dallas and welcomed King and his associates to the community. Controversy and faults glossed over, King became a figure that all could rally around. Not a terrible thing in itself, but not the true legacy of a leader.

Change does not come easy. Those who seek change are rarely beloved in their time. Today many of my bishop colleagues and others from across the country will remember King in the D.C. Mall on the 50th anniversary of his death. They will be met with awful weather according to the forecasters. But that is probably appropriate. If you wish to make change. To advocate for things to be different, the weather will often be against you. I wish I could be with them but my responsibilities lie in Texas this week. That said, thinking of King I remembered a night 6 years ago that I blogged about then (see below). When my cohort from Dallas Baptist University were in D.C. for our intensive learning experience and one of my colleagues asked me to go with him to the mall at night. To see the memorials lit up in the summer night. The King memorial had been opened less than a year. We combined it with a visit to the Lincoln memorial and also powerfully the Korean War memorial as well as my friend had served in the Korean military before entering seminary and now leadership in the the Baptist church.

History is never as clean as we wish it could be. King was a flawed leader as all leaders are flawed, how I know that for sure. But today we remember his life cut short. Murdered by hate. And I pray take a new measure of devotion to the work of peace and reconciliation. To the value of all people and to committing ourselves to the work of breaking down systems of racial oppression, bias, and privilege that poison our world and infect our churches. To remember one who died in the name of love.

Racism continues to pervade our society as it did in King’s day. Our current political climate of partisanship and nationalism only fuels these fires. May we take a day today, April 4, to remember and give thanks for the work of King and others. May we take a day to take seriously God’s call to unity and hope. May we, in the light of Easter, seeing God’s victory over death and sin, work for the life of our neighbor. To work for a beloved community.

Lincoln, MLK, and Korea at Night (originally published 6/27/12 on fwlutheran.blogspot.com)
Today we had a bit of a hiccup in schedule. Our visit to the Pentagon was unfortunately cancelled due to a schedule snafu. So we went to the library of Congress this morning and then to the Holocaust Museum (as planned) this afternoon. The Library of Congress was a fascinating tour, beautiful building, but I am going to actually focus on two things in this post. One I did last night, the other this afternoon.

Last night about 9pm I went along with another member of our group to see some of the memorials “after dark.” For those who have been in DC before, going to see the memorials lit up is one of the visual highlights of the trip, and this was no exception. My companion on this trip is a young guy, about my age, a Korean national who served in the South Korean army. So our visit to the Korean war memorial and the prayer he offered in thanksgiving for those soldiers who gave their lives for his homeland, was especially poignant. As was his clear petition to God that peace and reunification might finally come to his homeland. 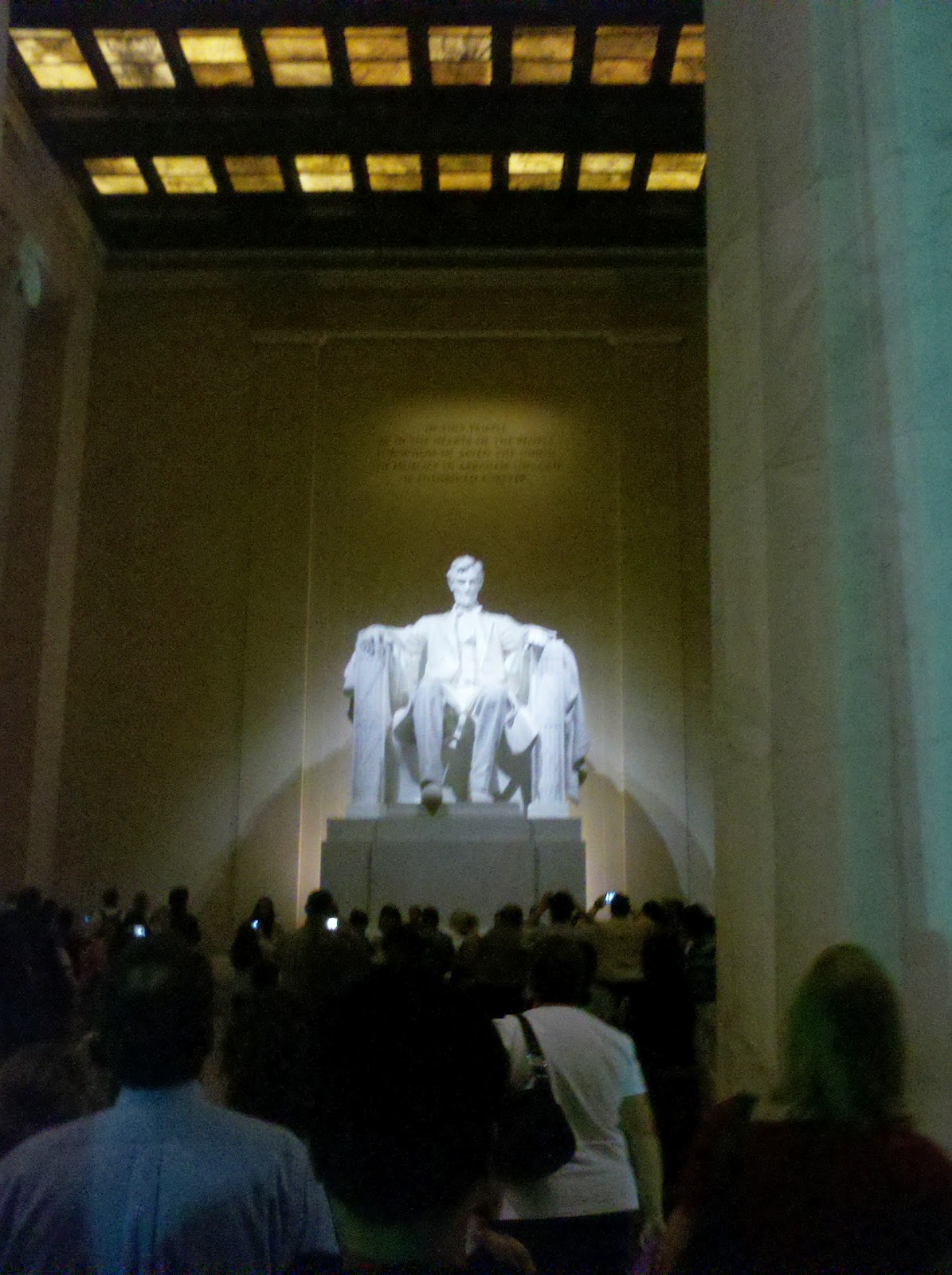 From there, we went to the Lincoln memorial, quite a sight to see in the dark, although the “Mr. Smith goes to Washington” ambiance is a bit lost when there are 1,000 other people running around taking the same picture as you. 😉 Yet to look out from that monument, over the reflecting pool, past the great obelisk of Washington and to the Capitol, it brings much of our nation’s history into perspective. While yesterday was about honoring the past and remembering that you don’t, as a leader, have to throw out everything from before, that experience was a reminder that clear breaks must often be made. The risk of split must be recognized but the threats of secession or lack of support cannot keep you from doing that which is right. While a united Korea would be a blessing, I do not believe my friend would be willing to have that unity at any cost.

The cost of leadership was well spelled out as we journeyed from Lincoln over to the new MLK memorial. There, at this newest and very powerful monument, the first to honor an individual who was a non-president on the mall, we see the importance of being willing to stand up to the status quo. Strikingly, King stands sentinel, across the tidal basin from Jefferson’s memorial. I am not sure that was intentional, but in a way the monument shows how this leader, 160 years after Jefferson, forced the issue and challenged the nation to take seriously, against the status quo, of whether we actually believed the words that “all men are created equal.” To see Americans of all colors streaming into that monument, but especially to see our African American sisters and brothers walking around this place, obviously proud that finally a person of color has a monument on the mall, is striking. 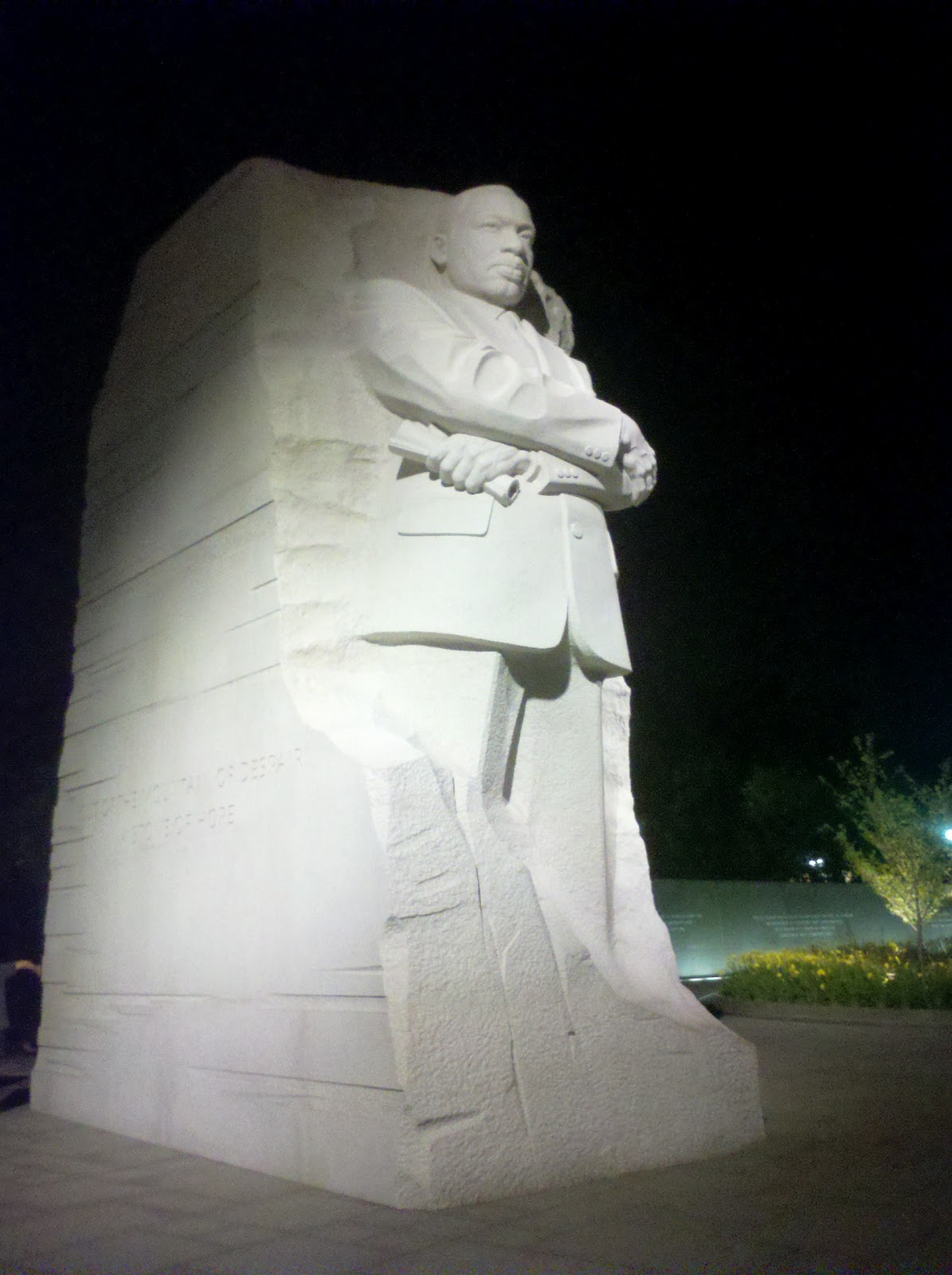 The terror of what happens when leaders do not stand up and risk split. When pleasing the base becomes more important than doing what is right, is made starkly in the holocaust museum. We had the honor of an hour of time with a survivor of the holocaust. A man who is a spry 90 years old, who survived the horrors of the war, was almost worked to death, yet can speak of hope and promise of friends who survived and is a living reminder of the horrors that come from the reign of fear. Hitler appeased the status quo to the extreme. He appealed to the basest of instincts of his base and in the end, rather than raising his followers moral plane (a requirement for Burn’s transformational leadership), he lowered them into terror and fear.

1 John 14:8 reminds us that “Perfect love casts out all fear.” In the museum, as we waited, I saw this plaque. These are little tiles painted by children and others who visited the museum. I found the use of that quote inspiring in the midst of the horror of this museum. Perfect love casts out fear, it allows us as leaders to challenge the status quo, to not remain stuck and to not fall for fear. May we have more leaders who are willing to risk loss for the life of the world. 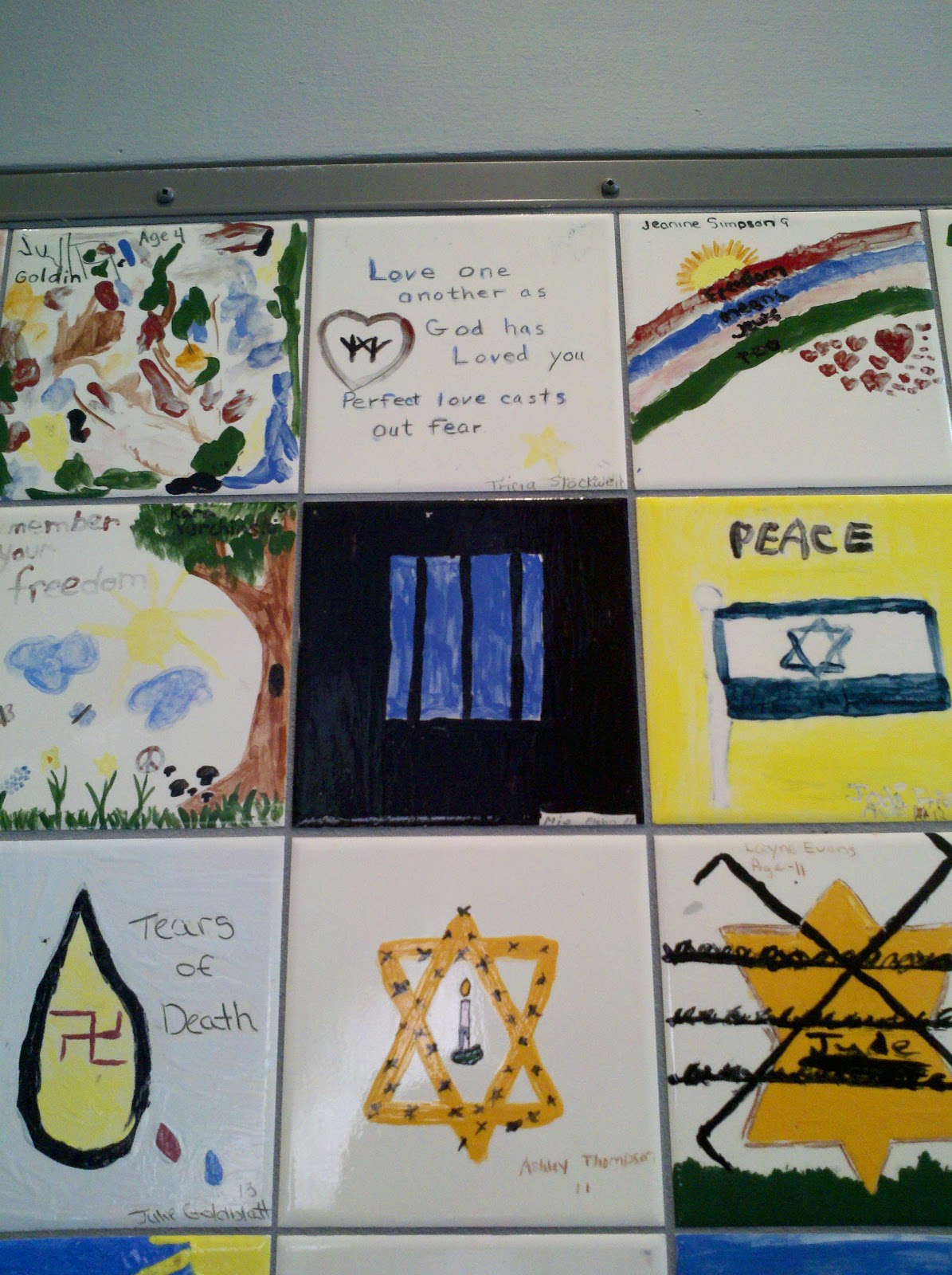