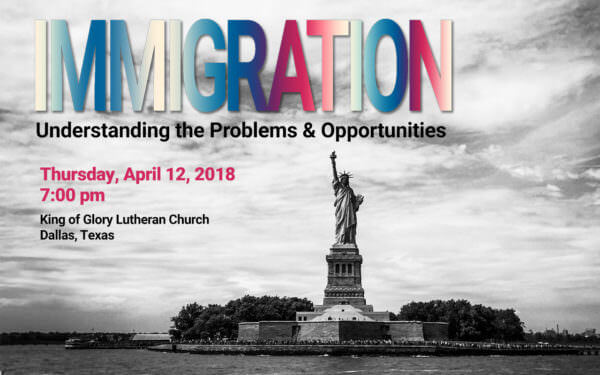 Are you confused about immigration?

Do you want to know more than just sound bites?

What are the facts and what do we really need to know?

You are invited to join us and our distinguished panel of speakers as they share their knowledge and discuss with the audience their perspective on the issue of immigration.

Dr. Caroline B. Brettell is University Distinguished Professor of Anthropology and Ruth Collins Altshuler Director of the Dedman College Interdisciplinary Institute at Southern Methodist
University. Brettell has a B.A. degree from Yale University and a Ph.D. degree from Brown University. She has spent her career studying the immigrant populations in Europe, Canada, and
the United States (most recently in the DFW area). Her particular and most current interests are in the gendered aspects of migration, issues of identity and citizenship, and the relationship
between immigrants and cities.

Francisco de la Torre Galindo is the Consul General of Mexico in Dallas, Texas, as of June 1st, 2016. Previously, he served for three years as the Executive Director of the Institute for
Mexicans Abroad at Mexico’s Ministry of Foreign Affairs. He has been a member of the Mexican Foreign Service since 1998. Mr. de la Torre holds a JD from Mexico’s National Autonomous University (UNAM) and a Master’s Degree in Diplomatic Studies with a thesis on “Considerations on the Vote for Mexicans Abroad”.

Chris Salcedo is a veteran broadcaster, author and a political analyst. The Chris Salcedo Shows can be heard on AM 700 KSEV, Houston and on 820 AM WBAP in Dallas/Fort Worth, right before
the great Rush Limbaugh Show. A graduate of San Diego State University, Chris got started in radio in news and traffic and was a news anchor in the 5th largest TV market in the nation at
CBS11/TXA 21 in DALLAS/FORT WORTH. He has filled in for the nationally syndicated Glenn Beck, Andrea Tantaros and Roger Hedgecock radio shows.

Click here for a two-page flyer that includes the panelist bios.