The Bolder Board Training 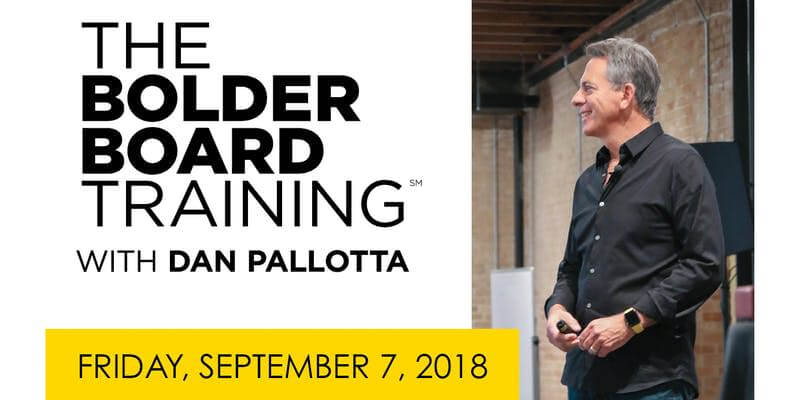 This training is being hosted by our partners at United Way of Tarrant County.

This is not your average board training.

The Bolder Board Training helps nonprofit boards awaken, articulate, and pursue their most magnificent dreams. It teaches boards how to work with their leaders to create audacious possibilities for impact. It is the first board training designed specifically to offer boards a pragmatic and conscientious alternative to the culture of financial deprivation and constriction that they often find themselves upholding. It is not a traditional training on governance and finance. It is an immersion in possibility and aspiration that positively and radically disrupts traditional ways of thinking. The Training takes place over the course of approximately seven hours. It is part lecture, part workshop. It is designed specifically for boards. Organizations are encouraged to bring as many of their board members as possible. The Training can also serve as a powerful first day to a board retreat.

The training liberates natural leadership instincts from the constraints of our cultural mindset about charity. It helps boards become conscious of persistent, limiting assumptions. It is based on the idea that we are at our best, most fully alive, and most impactful when we are challenging assumptions of impossibility – often that we didn’t even know we had.

Register your interest in a North Texas training on Friday, September 7.

The training is led by Dan Pallotta.

Dan invented the multi-day charitable event industry with the AIDSRides, Breast Cancer 3-Days, and Out of the Darkness suicide prevention events, which raised over half a billion dollars in nine years and were the subject of one of the first Harvard Business School case studies on social enterprise. His 2013 TED talk on philanthropy has been viewed more than 4.3 million times and is one of the 100 most-viewed TED talks of all time. His book, “Uncharitable,” is the best-selling title in the history of Tufts University Press. The Stanford Social Innovation Review said that it “deserves to become the nonprofit sector’s new manifesto.” He is a regular contributor to Harvard Business Review online. He is widely credited with changing the national conversation about impact and overhead in charity in America.

From a recent email from Dan:

I was in Australia week before last to give three speeches and lead the Bolder Board Training in Brisbane, which was wonderful. We now have 100 new Australian alumni to connect with!

Since the trip I cannot get the Sydney Opera House out of my mind. The reason I cannot, after having seen it, is because the idea to build it was ridiculous. The architect who designed it — Jørn Utzon — was an unknown 38 year-old Dane when his entry was announced as the winner in an international competition. His vision for a “sculptural, curved building on the Harbour” broke radically with the linear shapes of modernist architecture. And here’s the thing: in the 1960s, they had no idea how to build it. You know those iconic shells or sails that define it? The challenge of how to build them confounded the engineers working on it for years, even after the foundation had been poured! Imagine pouring a foundation for a building you don’t yet know how to build!

You remember how, in the Training, we talked about commitment and declaring a possibility? Pouring that foundation, without knowing how to build the building, was a commitment – a declaration of possibility. It was impossible, but their commitment to it transformed it into reality. It now not only defines that city, but in many ways that nation.

Imagine if it had never been built. Imagine if some expert put a stop to it because of its ridiculousness.

If you’re not being ridiculous, you’re not exploring your organization’s true potential. Everything in the world that makes us go “Wow,” was born of some absurd human being with a ridiculous, impossible idea — from the Eiffel Tower to landing on the moon to the idea of America herself. We are taught that prudence is sophistication. The opposite is true. The most sophisticated things I’ve ever seen in my life – the most intelligent solutions to the greatest technical challenges in history — all came from someone being ridiculous. Ridiculous is what really tests us. Stretches us. Forces us to use the full measures of our intelligence, creativity, fortitude and strength.

Anything less and our true potential for intelligence, creativity, strength and fortitude gets left on the table, never to see the light of day.

Resist the temptation to be safe, cautious and normal. Resist it in all things. Resist it with every fiber of your being. Lives are at stake in our work. Be ridiculous on their behalf.