It’s a 650-mile round trip from Fort Worth to Midland/Odessa, the farthest west mission outposts of our Synod. Between Christ’s Lutheran in Odessa and El Paso, a distance of another 300 miles, there is no ELCA congregation and frankly little settlement of significant size. The El Paso congregations are so remote from us they chose, in 1988 when the ELCA was founded, to be a part of the Rocky Mountain Synod, headquartered in Denver. It made more geographic (Denver is closer to El Paso than DFW) and time zone sense.

It is a long way to Odessa but well worth the time to meet with two of our congregations there (Christ’s, Odessa, and Midland, Midland). These congregations are planted in the boom/bust realities of West Texas where petroleum and high school football are king. However, despite the economic ups and downs, the lack of awareness of the Lutheran tradition (one of our worship leaders there relayed to me a story of being challenged recently about Lutheranism as a “cult”), these congregations persevere. For me, Odessa has a personal connection. My high school, Austin Reagan, defeated Odessa Permian twice for a state championship. Once in 1968 and then again in 1970. While I was not alive for those games, they filled the lore of my town and my team, and both of my head football coaches in high school, Dennis Ceder and David Halbrook, were members of those teams. Coach Ceder is battling cancer, and I wanted to make sure he and his family knew how much I appreciated his impact on my life. So I took time to drive by Permian High School and take a picture of their sign, which does NOT include 1970 because that number is on our gym wall in Austin because he was part of that team that won state in 1970. Lots of history and connections beyond the many miles of Texas. 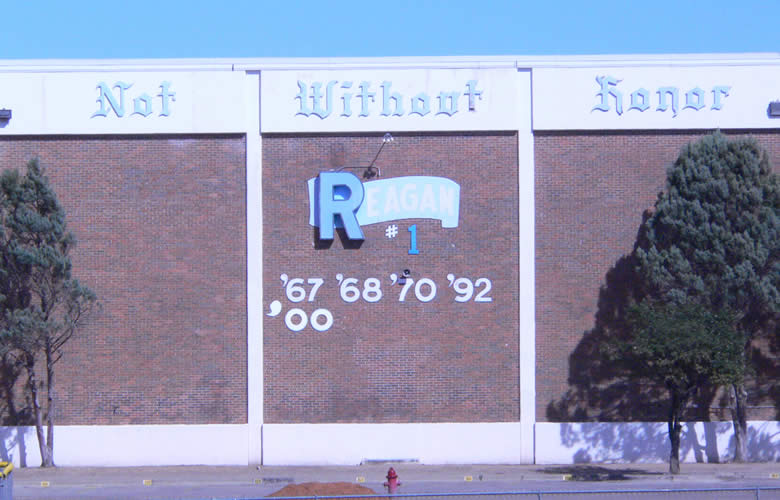 What is always interesting about visiting our congregations is to see the realities of their ministry contexts and how these communities respond. Midland/Odessa has significant demographic diversity including economic realities, immigration, and refugees communities. When I parked in the lot at Christ’s, Odessa, and got out of my car, my ears were filled with the sounds of Conjunto music and the smells of a bbq going on down the street. Midland and Ector Counties are now primarily minority communities. While no one ethnic group claims greater than 50% of the population, Latin@s now make up the largest segment of the population. 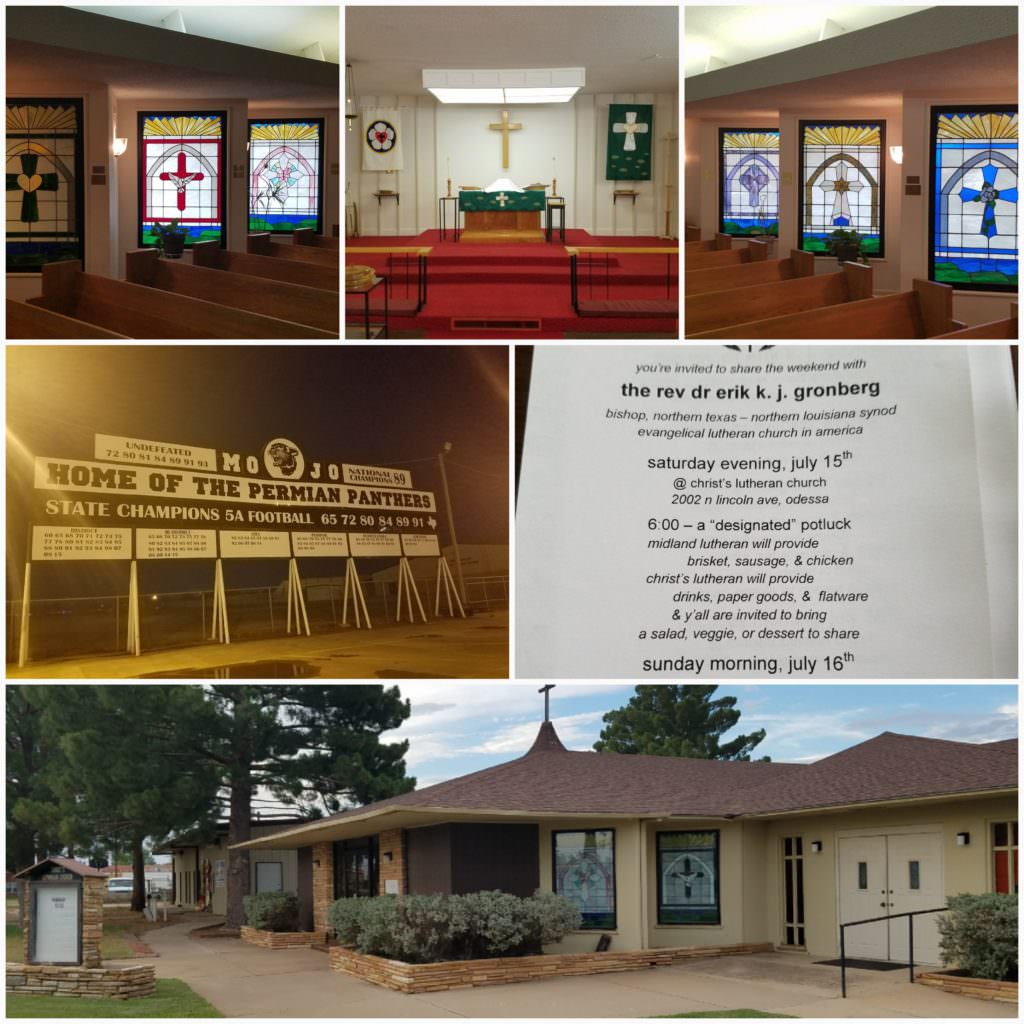 While challenged by resources and size, the congregations have responded. Midland Lutheran hosts a congregation of Burmese refugees, which draws over 150 worshippers each week. Christ’s former school building is now rented to another school drawing almost 200 kids a day. This connects them to the community and makes their presence well-known. Should we find an appropriate leader, they are interested and willing to see the possibilities in Latin@ ministry. Additionally, recognizing the need to teach Lutheran distinctive theology in the midst of overwhelming fundamentalist approaches, the congregations have engaged in “Faith Talk” events. Spending 4 hours on a Saturday once a month to teach what it means to be a Lutheran and to clearly articulate a theology of grace in the midst of an overwhelming culture of theological law. These are committed Lutherans, they choose to be part of our confessional community, and I am inspired by their witness. 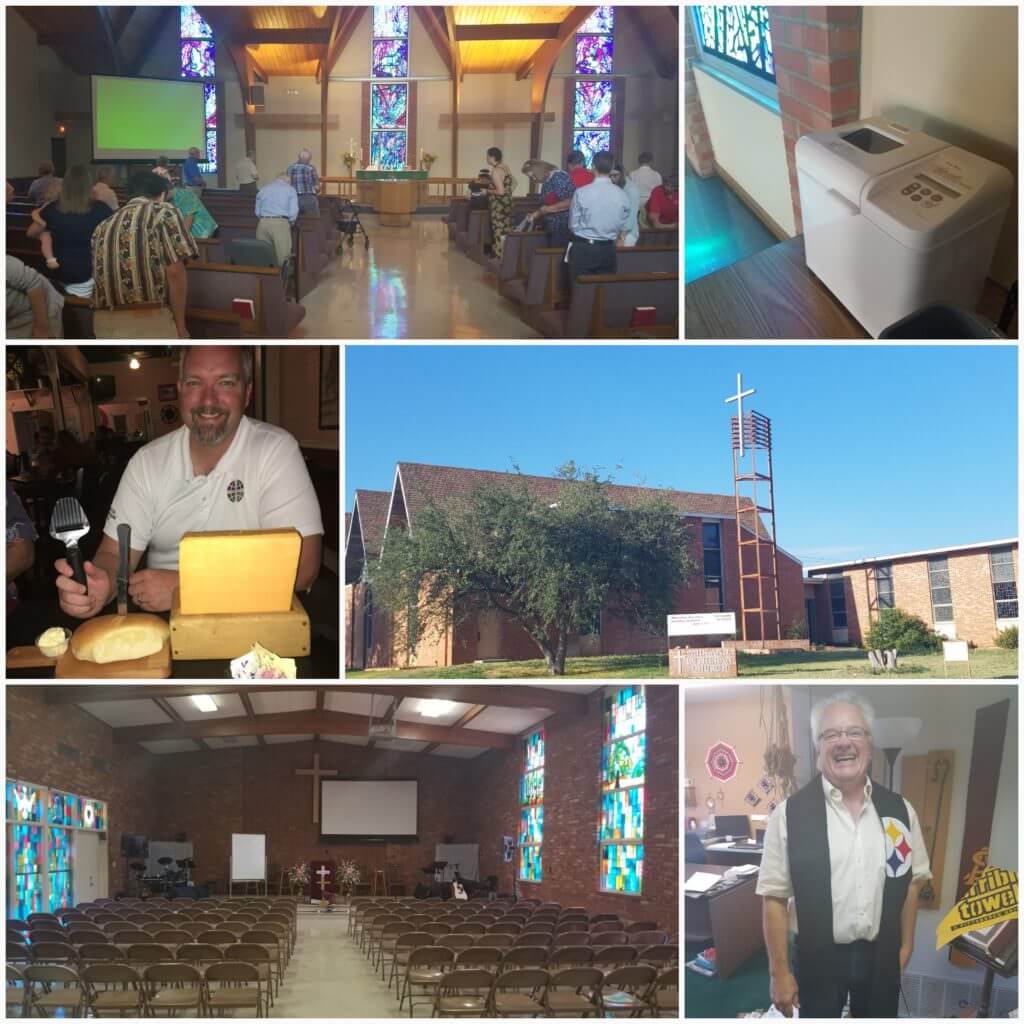 One of the most fun treats is that Midland Lutheran bakes fresh bread each Sunday in a breadmaker in the sanctuary. It was quite something to break the bread and see steam rise from the loaf. A reminder both of the freshness of the Gospel, as well as the fire and power of the Holy Spirit. It was a blessed weekend. I am grateful for the perseverance of these congregations and their leaders. To proclaim the clear and free gospel in the midst of fundamentalism is a challenge yet essential to our witness as Lutheran Christians. I was encouraged again by their witness and leadership.

We are as always, In Mission Together.