Bishop Gronberg has named creative growth as one of the synod’s key points of focus since his election. You can read more in his 2017 Annual Report of the Bishop. This week, we’re highlighting some great examples across churches and denominations. We encourage you to read through these and pray about ways you can be creative in your own ministry, community, and context.

Creative Growth – It Began With Tutoring 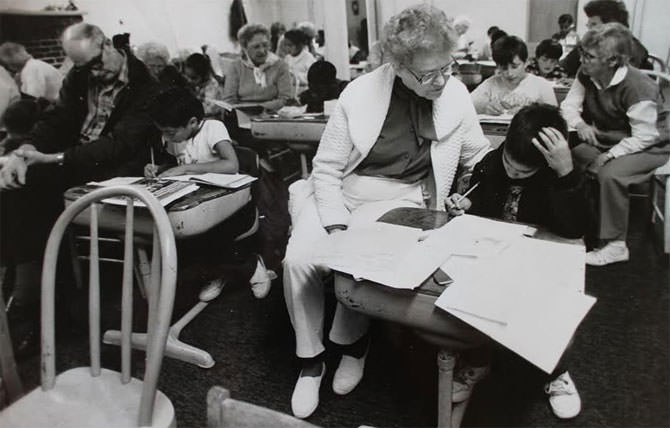 “…Trinity’s building is surrounded by the bleaker symbols of urban life, including graffiti-covered billboards, a homeless shelter and used needles in the grass outside the sanctuary door. Hilltop, as this district of Tacoma is known, has a record of serious gang activity, including homicides and a high crime rate.

It is also the place where Trinity is thriving. Over the past quarter-century, the church has resurged as a vital presence in the Hilltop community.

The congregation of Trinity Presbyterian Church (Tacoma, Washington) grew by 33 percent between 2011 and 2016, and many of the newcomers were young people and families. Today the congregation has close to 200 adult members and more than 130 children.

Church leaders say this has come about, not through efforts focused on drawing people into the fold, but through a powerful form of “other-oriented” ministry, reaching out and serving the needs of those around them.” [italics ours]

Read the full article here: How serving its community transformed a dwindling church. 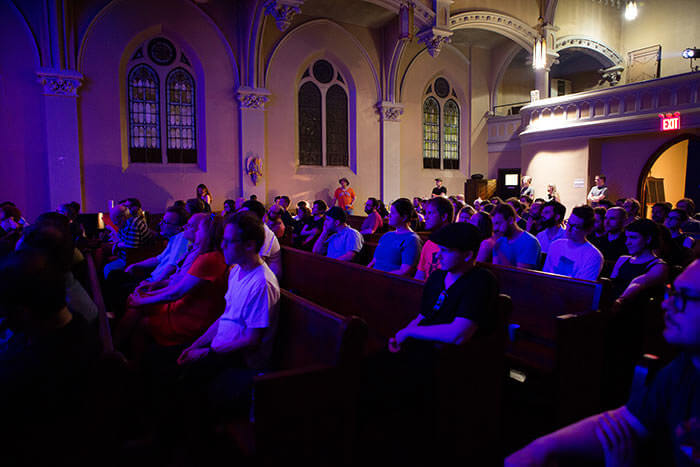 In contrast to Sunday worship, a concert by Robert Millis draws a large crowd to Park Church Co-op. (Photo by Whitney Kidder)

“On a sunny spring Sunday morning, the people of Park Church Co-op gathered for worship in their historic sanctuary, in the Brooklyn, New York, neighborhood of Greenpoint. The pews were totally empty. Instead, the congregants sat in an oval of chairs arranged on the chancel, around the communion table. Attendance that day: nine.

Simply by virtue of the body count, the church might appear to be failing. Once, more than 200 worshippers filled those pews on a typical Sunday. Yet since 2013, when the Rev. Amy Kienzle took over as pastor of what was then called the Lutheran Church of the Messiah, the congregation has shown signs of vigorous life and vibrant ministry.

It has flung open its doors to the community’s artists and musicians, hosting dance parties, art exhibitions and concerts. It has built a robust calendar of spiritual offerings, including a weeknight compline service that brings ancient chant and medieval polyphony to a neighborhood more accustomed to emo angst and indie rock. And two years ago, in a signal of its posture of partnership and of welcome to believers and nonbelievers alike, it rebranded itself the Park Church Co-op.

Kienzle’s work has begun to draw notice. Earlier this year, Brooklyn magazine named her to its 100 Brooklyn Influencers list, enthusing about Park Church Co-op’s openness to the creative community and writing that ‘Kienzle’s influence has firmly placed the congregation as the new neighborhood staple.’ But Park Church Co-op isn’t just an old church space reborn as a new artistic venue. Under Kienzle, it’s seeking to be a spiritual bridge to people who typically wouldn’t enter a Christian church, and in doing so, it’s re-connecting with its deep missional roots.”

Read the full article here: Rebranded ELCA church is a place of welcome for believers and nonbelievers alike. 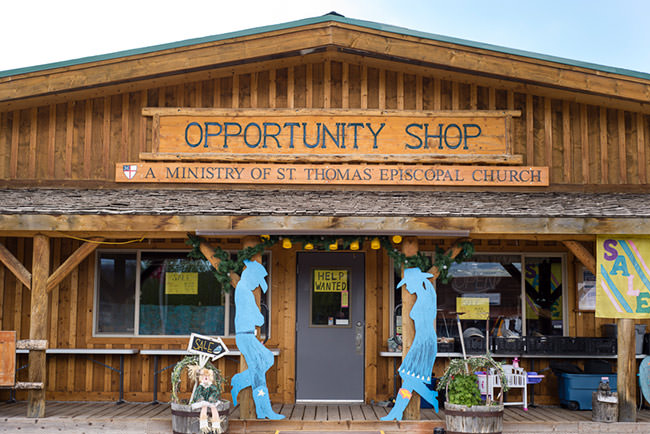 The Opportunity Shop traces its roots back to a 1924 rummage sale fundraiser.

“…Led since 2013 by the Rev. Melinda Bobo, St. Thomas Episcopal Church is the faithful keeper of a long tradition of service and good works, one that has made it an essential part of not only the town’s religious life but its community life as well.

St. Thomas may be small, but it has a very big impact on Dubois (pronounced DEW-boyz).

In an era when many traditional churches are becoming less visible in their communities, St. Thomas has for decades been a large presence in Dubois, mounting a broad array of outreach ministries and programs that would be the envy of churches 10 times its size. About 40 people attend the traditional Episcopal worship service on Sundays, but the church plays a vital role in many aspects of life in this town of about 1,000 people.

The church’s ministries include a thrift shop, a food bank, a community garden, and free overnight housing for hikers and bikers passing through the area, less than 90 miles away from the tourist meccas of Yellowstone National Park and Jackson Hole. A church of its place and context, St. Thomas has for more than 50 years hosted a weekly square dance during the summer, drawing tourists and locals alike. That and other social events, such as smorgasbord dinners and ice cream socials, raise money to support programs that help people throughout the region.” 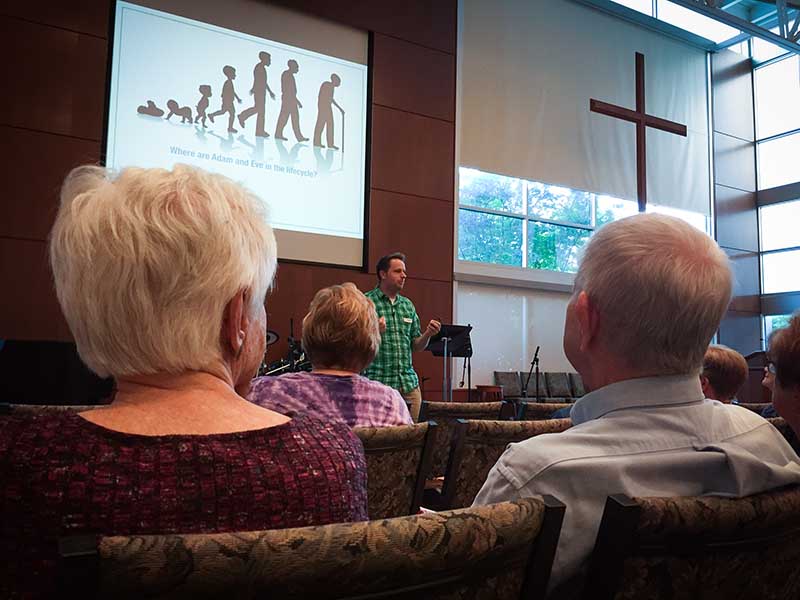 In the Rev. Daniel Pugh’s Bible study on Genesis 3, he explained that The Fall can be understood as a coming of age story. (RNS photo by Yonat Shimron.)

“At a Bible study on a weekday evening, Lutheran minister Daniel Pugh…clicked through a PowerPoint presentation, telling members of Christ the King Lutheran Church that one way to interpret the story of Adam and Eve is as a coming-of-age allegory about a pair of carefree teens caught red-handed having sex….

Lutherans have certainly come a long way since their namesake, Martin Luther, nailed his 95 theses to the Castle Church door in Wittenberg, Germany, 500 years ago this month, sparking the Protestant Reformation.

These days, the largest U.S. denomination to trace its heritage to the great reformer, the Evangelical Lutheran Church in America, is struggling to reverse a decline in membership among its 9,252 churches.

Its successful churches, such as Christ the King, located in a bedroom community of Raleigh, are pushing forward with a new vision, one that has less to do with upholding the purity of Luther’s theology and more with the spirit of Luther’s reform agenda….

‘A lot of times churches are trying to preserve the legacy of who founded the congregations founded long ago,’ said Elizabeth Eaton, the presiding bishop of the ELCA. ‘When you try to hold on to something so tightly, you strangle it. Taking a risk while being faithful to the core message of grace is my advice.’

‘We’re here for the sake of the world, not to preserve some silly tradition,’ he said.”

Read the full article here: Amid decline, one Lutheran church strives to live up to its namesake. 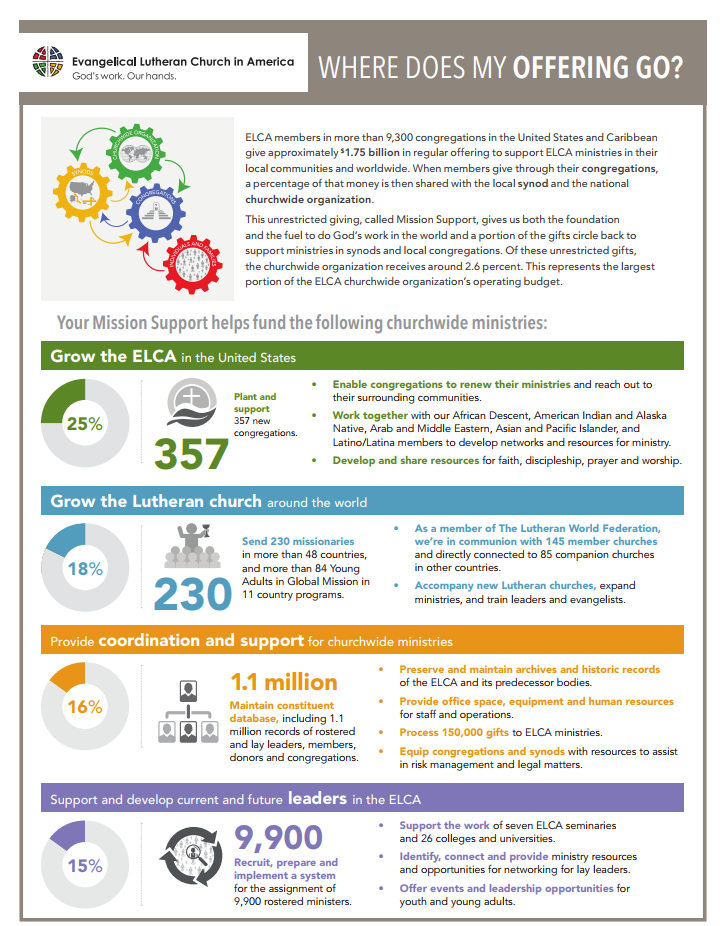 The ELCA has updated the Where Does My Offering Go? graphic. 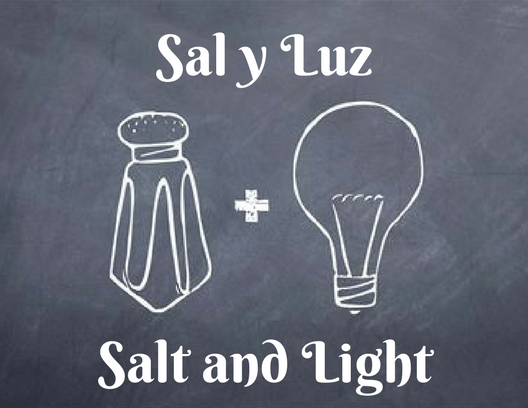 Where in the world is?

Do you have news or announcements to share? Please submit to the Synod office (office@ntnl.org) for consideration for our next NT-NL News.