A wonderful article was recently published in the Living Lutheran about work we are doing in NT-NL Synod, ELCA on Stewardship. Exciting ways that our synod is leading in this critical area of our life together and particularly with our Conferencia Latina NT-NL ELCA. If you are interested in learning more contact a member of the Synod Stewardship Team or our DEM Irma Banales. #NTNL #InMissionTogether 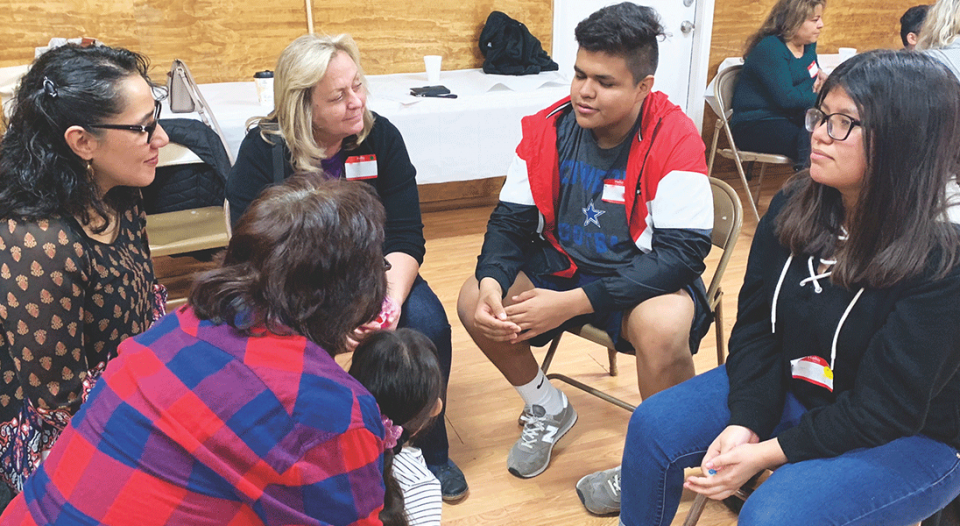 Members of all ages from the Northern Texas-Northern Louisiana Synod Latino network participated in the Generosity Project workshop.

Sharing God’s gifts with one another through stewardship is an integral part of the Lutheran faith. But sometimes the idea of stewardship gets misunderstood, equated simply with monetary giving rather than a generosity of much more—time, spirit, love. Linda Staats is trying to change that with the Generosity Project, a new stewardship resource she authored for ELCA congregations.

“Stewardship has gotten a bad rap, so a lot of people are using the word ‘generosity,’ ” she said. “Stewardship is that larger umbrella, and generosity is a part of it.”

The Generosity Project was born through a collaboration between Staats and two others serving in the Rocky Mountain Synod. They’d received a grant to create innovative approaches to stewardship and together crafted a program that focuses on promoting generosity in two ways—across generations and in households. And that sense of generosity is less about specific monetary amounts than a shift in behavior.

“The goal is not to increase giving by a percentage.The goal is to change the culture in a congregation,” she said. “It’s how we change stewardship—we’re building a culture to bring all generations together and build an atmosphere of trust, and equipping the home as a place where generosity is practiced.”

Once they decide to implement the project, congregations engage in a four-hour workshop that brings together all generations —from toddlers to centenarians—to share, engage and discover their capacity for generosity.

“One of the most powerful exercises we do is a circle of blessing,” Staats said. “We form a circle of the oldest to youngest, and we talk about those who come before us and who will come after us. And we talk about God’s story of grace and generosity. It’s a new way of seeing each other and changes the way we talk to each other.”

Additional sessions and worship follow the initial workshop, but the most critical components are the “Live It Out” take-home activities, which challenge participants to take what they’ve learned in the sessions and apply it in their own homes.

“One of the moms in the project said, ‘Our children don’t know we’re generous because we do it online, and we need to sit down and talk it out with our kids,’” Staats said. “We need to say ‘How are we generous?’ and also ‘How have people been generous to us?’ It’s not just giving; we are receivers as well.”

In the years since its introduction, the Generosity Project has grown legs, expanding from Alaska to Delaware and points between.

In the Northern Texas-Northern Louisiana Synod, the resource has taken off in a big way, particularly in the Latino community. Rev. Irma Bañales, the synod’s director for evangelical mission, helped launch the initiative in the Panhandle Conference. The response was so positive, she suggested they take it to other Spanish-speaking congregations, reaching as far as Chicago, where she helped launch a pilot program.

Bañales sees the resource not only as a means to open eyes and hearts to stewardship, but also to connect congregants who can bring something special to each other’s lives. She relates her own experience of not having a close relationship with grandparents, and those of members whose children and grandchildren live far away, filling a void in their lives through the cross-generational fellowship.

“We were in Anchorage and one lady exclaimed, ‘We never talked about any of this when I was a kid, and I wish we had.’”

“It’s another way to experience the pieces we haven’t had in our childhood,” Bañales added. “And the children have the opportunity to feel really welcome and like, ‘They care about us.’ It’s not a lecture—it’s really listening and putting it into practice in the moment with games and activities.”

Bañales is working with Staats and others to create a Spanish version of the Generosity Project to launch later this year, and she’s also planning to implement the sessions at events such as the First Call retreat and candidacy committee sessions in December.

In the Northwest Synod of Wisconsin, Laurie Skow-Anderson initiated the resource four years ago and, prior to her election as bishop, implemented it in a number of settings, including in confirmation classes with youth and their parents, grandparents and mentors. The questions in that session ranged from the first telephone you remember to the first person who told you about Jesus. The answers—which understandably varied wildly across the multigenerational groups—spurred deeper conversation about faith and generosity that Skow-Anderson feels is lacking in day-to-day life.

What comes from those sacred exchanges can be enlightening. That’s been the case in Alaska for Pastor Diane Krauszer at Trinity Lutheran Church in Palmer.

That joy is especially relevant in today’s troubling times, Krauszer added, which is why the congregation will initiate a six-week version of the Generosity Project in the coming months.

“This allows us to turn our minds and hearts away from the fear that says we don’t have enough to realizing we have an abundance that we can share in many ways,” she said. “In Alaska, we’ve entered in that fear and crisis and anxiety mode about what we don’t have, what’s not here, what’s being taken away. This is a reminder that generosity comes in many forms—it’s not just about money.”

One dynamic aspect of the Generosity Project is the flexibility it gives congregations and synods to customize the materials to fit their needs. For example, at Lutheran Church of the Good Shepherd in Bel Air, Md., Teal Anderson incorporated the Generosity Project into Lenten devotions, reaching a new audience that might not come out for special events outside regular services.

“Our next step was to say, ‘How can we use these materials to get our folks involved?’” the pastor said. “So we created the Lenten devotion booklet. We have a congregation that’s been following the narrative lectionary, so we wanted to pull in the five Wednesdays in Lent, and we used the Generosity Project for that series.”

“The Holy Spirit just shows up when a 10-year-old and this 101-year-old woman who have never met are sitting hand-in-hand, gazing into each other’s eyes.”

The experiment was such a success, it was shared synod-wide and also with Staats, who disseminated it to congregations across the nation. “I heard Western Iowa might be using it,” Anderson said. “It brought a broader audience than I expected.”

Anderson plans to build on that success with a similar series during Advent. For her, the Generosity Project is about giving congregants the tools to incorporate generosity as an ongoing habit.

“I love helping equip families with a way to think about generosity on a daily basis,” she said. “It’s about helping people participate in stewardship in a family-friendly way and a new way of engaging with the idea that God has been generous to us, and how we can live out a response to that in our daily lives.”

That spirit captures Staats’ purpose in creating this resource—to connect people with each other, with their communities and, ultimately, with God.

“The Holy Spirit just shows up when a 10-year-old and this 101-year-old woman who have never met are sitting hand-in-hand, gazing into each other’s eyes,” Staats said. “In this society where everything goes so fast and everyone is so busy, it’s something to literally gaze into each other’s eyes and know one another’s story and feel the Holy Spirit. I think people are craving that, and it brings joy.”

The Generosity Project resource is available at elca.org/generosityproject. Additional stewardship resources can be found here.