Racism permeates day-to-day life in the United States. The area we serve through the Northern Texas–Northern Louisiana Synod is not immune.

We pass by racism’s past effects and present realities on a daily basis. The present realities – the murder of Ahmaud Arbery or the health disparities laid bare in the midst of the COVID-19 pandemic – take up most of our attention. But the continuing effects of the past are often in plain sight.

Even in the midst of our present global pandemic, Lutherans in northern Texas and Louisiana are called to address the sins of racism in our midst. As we felt viscerally during last year’s Leadership Convocation with the Rev. Prof. Taurean Webb, our commitment to active anti-racism can’t waver because racism doesn’t take a break.

Where I live, in the northern part of NT-NL territory, for instance, the central architectural feature of Denton is the County Courthouse. To enter the Courthouse from the south, one passes through the archway formed by a monument to Confederate soldiers. Taurean and I visited that monument just before the Convocation. We should have also paid a visit to nearby Quakertown Park.

Quakertown Park sits immediately northeast of the Courthouse-on-the-Square and just south of the Texas Woman’s University campus. It’s a flat, open space featuring a large playground and a municipal water park (both of which are now closed).

The State of Texas historical marker I share here is tucked into a landscaping feature at the far southern end of the park. It tells the story of the constant harassment and eventual ethnic cleansing of Quakertown’s Black residents in the 1910s and early 1920s.

As I strolled around the park a few days ago, the sign caught my eye, as almost all historical markers do. The events recounted by the sign are a testament to the violence – both vigilante and bureaucratic – of anti-Black American racism. Moreover, the content of the sign is itself an expression of racism.

The story of Quakertown brings to mind the brutal history of the Tulsa Race Massacre in my home state of Oklahoma, a crime of white racism perpetrated on the Greenwood district over May 31 and June 1, 1921. The bureaucratic violence against the residents of Quakertown reached its apex in April 1921. The “Roaring ’20s” certainly roared on the Black citizens of the United States.

As Carol Anderson argues in White Rage, Anglo-American resentment of any Black performance of equality produces deep anxiety among people who imagine themselves to be superior. The result is not just racist ideas, as explicated by Ibram X. Kendi, but violence: physical, bureaucratic, or both.

Oklahoma is struggling to educate Okies and the rest of the United States about the Tulsa Race Massacre. The subtle shift of naming the event a “massacre” rather than a “riot” is tied to the bureaucratic violence of denying insurance payouts following the spasm of white racist physical violence.

Any effort to promote awareness and policy change is an uphill battle. White folk, it seems, don’t like to be reminded.

Texas has its own histories of white racist violence against Native and Black communities with which it must come to account. This historical marker in the “Quakertown” district of Denton is just the tip of a giant iceberg of white violence.

That violence includes the historical marker itself.

While the sign tacitly admits that the burning of the “Fred Douglass School” was an arson attack, this phrasing submerges the full name and legacy of Frederick Douglass, the escaped slave, abolitionist leader, and public philosopher. 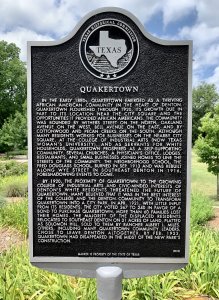 Naming their school after Douglass was an act of pride and self-worth. The sign’s truncation of this witness to a strong, self-aware Black community is significant.

By 1920, we are told, the Quakertown community had gained additional attention. Its location between downtown Denton and a college was considered problematic. We are told of “the civic-minded interests of Denton’s white residents.” Given the past terroristic violence and coming municipal ethnic cleansing, this phrasing seems a bit soft. What, exactly, were these “civic-minded interests”?

The Frederick Douglass School burned in 1913 and was rebuilt in 1916. The city decided to ethnically cleanse Quakertown in 1920. Denton’s monument to Confederate soldiers was erected in 1918.

Elsewhere, toward the southern end of NT- NL territory, another event took place in that same timeframe. The lynching of Jesse Washington occurred in Waco on 15 May 1916. One of the most high-profile lynchings in the United States, the Waco Horror, as it came to be known, involved between 10,000 and 15,000 white spectators. Photos from the event, commissioned by the Mayor, were sold as postcards. Just as the Tulsa Race Massacre was featured in the television series The Watchmen, the story of Jesse Washington’s death at the hands of white terrorists was told in the Spike Lee film, BlacKkKlansman.

By 1923, Waco was a haven for the Ku Klux Klan and Quakertown was no more, swallowed up in a fit of ethnic cleansing and “civic-minded” improvement. The park remains, as does the Confederate monument. It is the emptiness, the barrenness of Quakertown Park that resonates most with my experiences of the Greenwood District in Tulsa. There, residents were driven out through different means. But driven out they were.

Mark Twain is said to have once quipped that the game of golf is little more than a good walk spoiled. For me, as a white-presenting man, Denton’s most visible monuments to anti-Blackness – the Confederate monument and Quakertown Park – could be just that. But they are so much more.

They are clues to the resilience and strength of Black America as communities struggled to recover from the evils of American slavery. The profound success of Black families and communities from Greenwood in Tulsa to Quakertown in Denton proclaimed a human equality white people could not and still cannot abide.

These same racist ideas are with us, in both physical and structural violence. The good news is that Black resilience and strength remain.

Care of the neighbor through responsible action is the center of Lutheran social ethics. This commitment informs our church’s action and voice in response to our present health pandemic. Our responsible action comes not just in the form of responsible action in the present, but faithful remembrance of the past. In this way, we refuse to let either the memory of injustice or the memory of resilience and resistance fade away. We certainly do not stand idly by as our historical markers painfully distort an even more painful past.

Until we have the courage to revisit and forthrightly retell stories of the past, we will develop neither a vaccine nor a treatment for racism in the present, a preexisting condition intensified by our present struggle with COVID-19.