Today (Sat July 3, 2021) began at our family’s karate dojo with my eldest’s fitness test for her black belt exam in two weeks. She was nervous but exceeded the expectations. So thankful for the support of the North Texas Karate Academy, LLC for my kids and family.

I left morning sparring a bit early to head down to Clifton, TX for the funeral of the Rev. Allen Johannes. Allen has a fascinating story of faith. Born in New York and having moved to Galveston as a young adult he connected with First Lutheran, Galveston (one of the oldest Lutheran communities in Texas). Although 21 when he arrived there he was quick to recognize he had gifts for ministry and headed to Seguin, TX for college at Texas Lutheran University. There he met is future wife as a Freshman when they were both helping in rescue efforts during the great Seguin flood in the 1950s.

Perhaps the powers of this world wanted to remind me of that day as I drove the majority of what normally is a relatively short easy trip in driving rain. A July monsoon arose and as you can see from the picture the Brazos river is benefiting from it greatly. I took this picture while at a stop as the bridge between Hill County and Bosque County, crossing the Brazos, is under construction and traffic can only go one direction at a time. 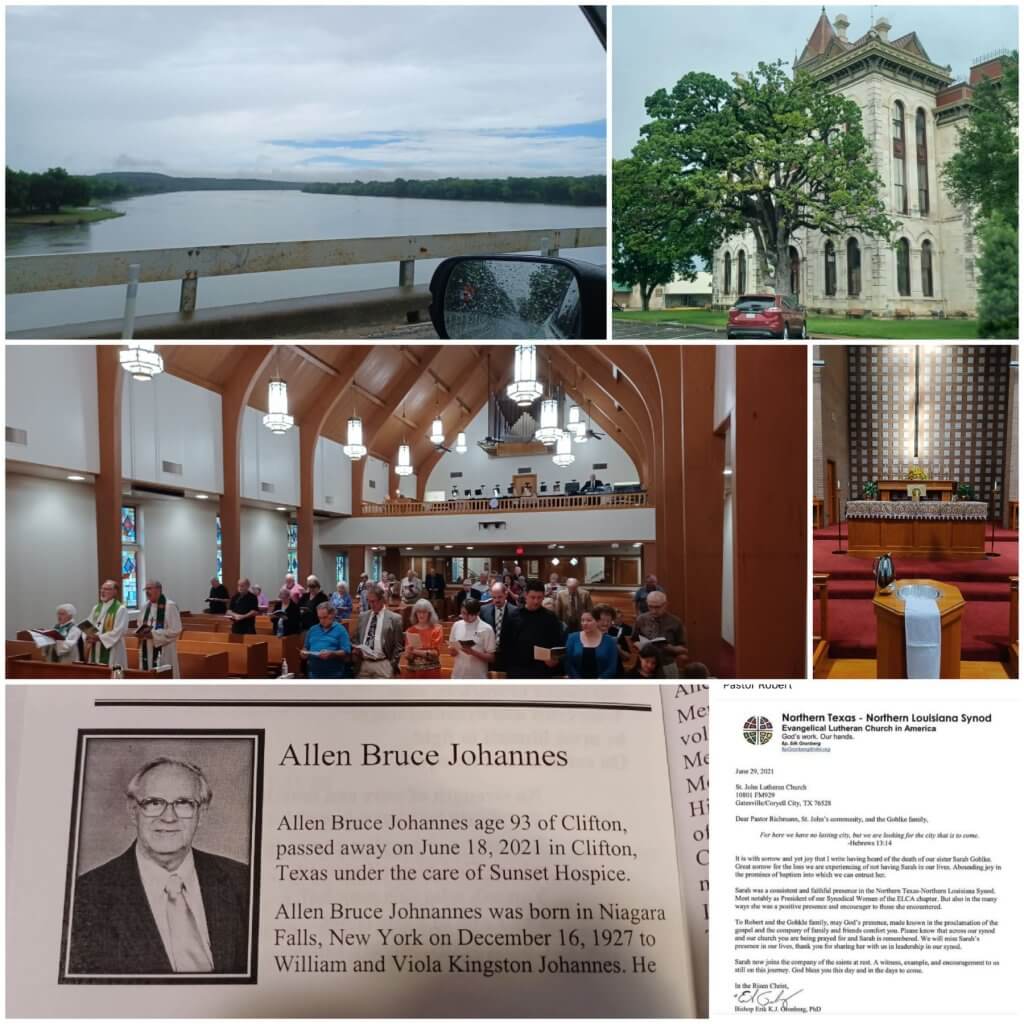 He then went to seminary and served a number of congregations across the country and Texas. In NT-NL Synod, ELCA he served St. Peter, Malone and Faith, Meridian. I was grateful for the hospitality of the Rev. Don Wright of Trinity Lutheran, Clifton, TX for inviting me to preside while he preached a wonderful gospel focused yet personal sermon about Allen’s life and ministry.

I was not able to be present on Friday at St. John, Coryell City as they held a funeral for Mrs. Sarah Gohlke. My associate and director of Briarwood Leadership Center the Rev. Dr. Robert Smith was present on my behalf and read the letter included in the collage below. Sarah was a beloved part of our synodical life including president of the NT-NL Synodical Women’s Organization.

We give thanks for the lives of saints like Sarah and Allen, trusting that the promises of baptism are true and entrusting them to God’s everlasting mercy. #InMissionTogether