This blog post was prepared for the national day of mourning called for by the Evangelical Lutheran Church in America and the Episcopal Church USA. While the day was originally intended to observe the 100,000 lives lost to the COVID-19 pandemic, it has now been expanded to include the lives lost through unjust and inequitable policing practices. #Lament

The United States has reached a boiling point. Anyone looking from the outside would grieve the instability and danger we apparently face.

The ongoing reality of police brutality is just one sharp manifestation of the deeper disease of racism at the root of American society. Whether your hope is to quell the present unrest or to fan its flames into a refining revolutionary fire, you need to comprehend sources of frustration and rage far beyond the murder of one man.

A recent editorial in the New York Times suggested that the United States is facing “parallel plagues” of coronavirus and “police killings of black men and women.” These are plagues, yes, but they are not parallel. Only by understanding how they intersect can we come to clearer analysis of our present situation and build a more livable future.

The 25 May 2020 killing of George Floyd by police officers in Minneapolis, Minn., has sparked protests nationwide. As I begin this essay, demonstrators and police are clashing and buildings are burning from Los Angeles to Washington, DC, just north of the White House.

A police officer held his knee on Mr. Floyd’s neck for almost nine minutes. For close to three minutes, Mr. Floyd was motionless, having lost consciousness or already died. The lead officer was assisted by three others, who either jammed their knees on other parts of Mr. Floyd’s body or stood by, passive. Each of the officers ignored Mr. Floyd’s own cries and the pleas of other observers.

Neither the abject horror of this cold-blooded killing nor the sluggishness of local and state authorities to bring charges against the officers fully explain the extent of nationwide public protest and confrontation we are witnessing. It is not just about police brutality.

It is, rather, about the deeply rooted realities of American racism itself, freshly unearthed by our country’s unique experience of the global COVID-19 pandemic. These protests—both the ‘peaceful’ marches and the ‘violent’ actions of arson and sabotage—are components in the quest for justice. In the United States, any quest for justice is bound to the quest for racial justice.

Recent weeks have seen the segments of American society representing social and economic power (white men and their fellow travelers) advocating vociferously for ‘reopening’ the country and returning to ‘normal.’ For the vast majority of black citizens in the United States, ‘normal’ is represented by the vigilante lynching of Ahmaud Arbery and the police killings of Breonna Taylor and George Floyd.

When demonstrations and protests began to take hold across the United States following Mr. Floyd’s killing, the contrast between police accommodations for armed white men storming statehouses and the militarized response to unarmed protesters—many black, but with broad diversities marching in coalition—could not have been clearer. Demonstrations and protests in favor of what is ‘normal’ gain the support of governing and policing authorities; efforts to change the status quo are suppressed with ever greater force.

These public demonstrations help us better comprehend the broader context of the present moment. At every level, the United States has been convulsed by this combined public health and economic crisis—itself resulting in a financial crisis and an unemployment crisis. No segment of American society—from White House staffers to bus drivers dying from exposure to passengers—has been left untouched. While every country on the planet faces similar pressures, profound American mismanagement of this crisis has exacerbated rather than calmed Americans’ experiences of anxiety, loss, pain and fear.

Persons living with the challenges of poverty or disability have found their conditions worsened. Black, Latinx, and Native people have been informed repeatedly that while their labor may be considered essential, their lives are expendable.

If ‘normal’ means returning to and reinforcing a system in which one’s life doesn’t matter—a situation in which the phrase “All Lives Matter” is revealed to be, at best, an empty platitude—‘normal’ is to be loathed and resisted.

White people wanting to avoid conversation about racism are fond as asking “Why did you have to bring race into it?” Racism doesn’t need to be “brought in” to address the stratified American experience of the COVID-19 pandemic; it’s already here. When discussing the United States—a country built on stolen land with stolen labor—racism can be temporarily ignored but never brought up as a new topic.

While police brutality against black Americans is a pressing topic, it is not the only source of black rage. In the context of the COVID-19 pandemic, black and Indigenous leaders within the United States were acutely aware that the clinical assessments being developed to ration access to life-saving care (including ventilators) would disproportionately affect their communities. Diseases associated with historic racism and poverty (including heart disease and diabetes) would result in lower scores, even if the clinical test itself was technically blind to identifying characteristics.

Now, as testing is finally become more available and we hear achingly incremental updates on the development of a vaccine, black people are not convinced that they want a needle developed by the American public health system stuck in their arm. What experiments might the US government try to conduct on vulnerable populations? The Tuskegee Syphilis experiment looms large in black American consciousness. Today’s science may be sound and its ethics nearly perfect, but a well-founded mistrust demands greater governmental accountability to this population carrying generations of trauma and abuse.

Racially biased policing has intersected directly with American societal responses to the pandemic. Studies in New York City indicated that black people bore the brunt of disproportionate enforcement of social distancing directives. This ‘normal’ aspect of black American experience persisted even in the midst of an unprecedented crisis.

Police are highly trained and entrusted with both great power and great responsibility. That responsibility involves clear guidelines for the use of coercive force, the purview of the state and its agents, and the commitment that violence be used sparingly and equitably. Because both states and their police forces are human institutions, the trust constituting legitimacy can be abused. Proper policing recognizes those temptations and works to counteract them.

As both the Ahmaud Arbery and George Floyd cases demonstrate, justice delayed is justice denied. Obfuscation by police themselves, including the falsification of reports, can cause other unjust delays. Technology is changing and challenging these systems, especially in police body cameras and the ubiquity of mobile phone recordings. But even these images don’t tell the entire story; interpretation is still required.

Police perspectives are important in that process; law and its enforcement are vital for the proper functioning of society. Police are never above scrutiny— either as individuals or as a policing system. Just as blind support of “the troops” often neglects to properly interrogate military policies, blind support of police neglects critical assessment of policing policies and practices. That blind support cannot help but become racialized.

One expression of blind support for policing is found in the “Thin Blue Line” flag. The flag represents the “Blue Lives Matter” movement which emerged in response to the #BlackLivesMatter movement founded in 2013 following the acquittal of the person who killed Trayvon Martin. 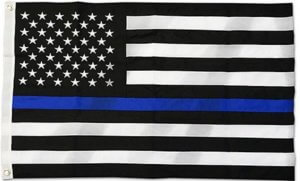 Americans promoting the “Thin Blue Line” flag would most often be offended by defaced or adulterated versions of the American flag. But there it is, in black and white, a blue stripe replacing one of the white stripes, surrounded by stripes and a field of black. The “thin blue line” understands police “as the force which holds back chaos,” a domestic shield of protection against criminals. The “Blue Lives Matter” movement’s founding binary assertion between Black and Blue lives and the color scheme of the flag leave little doubt: the “thin blue line” protects white lives from black threats.

For the past couple of months, I have been writing about how the United States is underestimating the magnitude of the COVID-19 coronavirus pandemic. America has not been prepared to deal with the stress and strain the pandemic is bringing.

Our lack of preparation means that our response to the pandemic has been bungled on every possible level. These failures have led our leaders on both national and state levels to rush past the trauma and loss in order to get back to ‘normal.’ In addition to declaring grief socially unacceptable, this rush to normal seeks to move the rug back over the holes in our national floor, hiding again the open graves on which this country is built.

The pandemic has exposed too much for us to wish for ‘normal.’ George Floyd’s unjust death is a ‘normal’ we can no longer abide.

In response to demonstrations and protests, President Trump has opted for division rather than recognition and healing. This is no surprise. More surprising, perhaps, is Vice President Pence’s admission that, in the United States, property is now and has always been more important than persons.

When Vice President Pence said that particular quiet part loud, it resonates with unpropertied lives. It resonates with women who know that, in this country, it wasn’t too long ago that only propertied white men could vote. It resonates with communities descended from people once held as property. And it resonates with people whose land, held in common, was stolen, divvied up, re-stolen by the state (in a process called allotment), and then sold cheaply to white settlers.

The gatherings and marches taking place across the United States are not riots. They are uprisings. They are rebellions.

Those taking part must expect that the state will respond in kind. The white men marching with guns—both real and fake—feared the loss of a country that has always been theirs. That is no revolution. This new round of uprisings seeks a fundamental change to social order. In a country that prioritizes the suppression of all rebellions, foreign and domestic, this is a fundamental threat. Expect that the empire will strike back.

This present national eruption is not all about Mr. Floyd’s heinous death, or even the unresolved realities of police brutality. The marches are about confronting racism in itself, the original sin of the United States. See you out there.