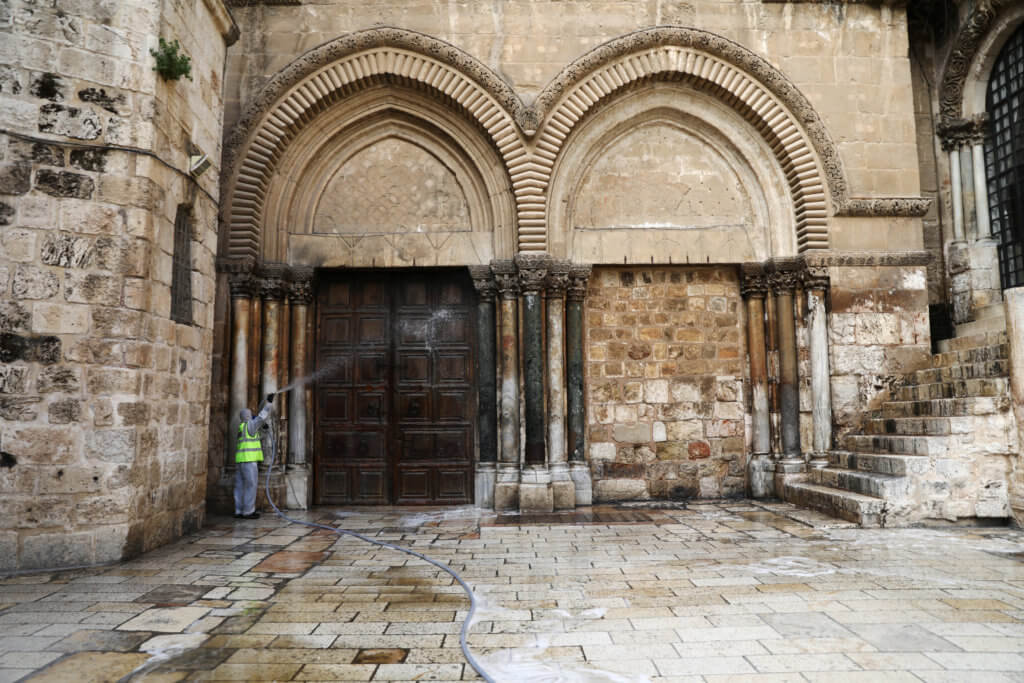 On this Good Friday, I am remembering the many times I have paused at the entrance doors of the Church of the Holy Sepulchre (what Orthodox Christians call the Church of the Resurrection in Jerusalem). The marble columns framing the doorway are covered in carved crosses and messages in myriad traditions and languages: Latin Catholic, Armenian, Greek Orthodox crosses, and messages in Arabic, Armenian, and Greek, each marking a pilgrim’s arrival at their destination.

These columns and carvings are centuries, some perhaps a millennium, old. In these markings, we connect physically with the universal Communion of Saints, verifying the Christian community’s identification of this place as the location of Jesus’ death, burial and resurrection. For Christians, this modest and highly contested space is the Axis Mundi, the center of the world, the holiest site in creation. Today, due to the global COVID-19 pandemic, these doors are closed.

One of my joys of living, serving and teaching in Jerusalem was introducing people to this space for the first time. Invariably, first-time visitors were skeptical of this and other holy sites. Is this really the place where these things occurred millennia ago?

My response, developed over some time, went something like this: IF there was a first-century Palestinian Jew named Jesus (one of the most popular names of the time) whose small group of friends thought he was the Messiah and who got himself crucified by Roman authorities because he threatened imperial interests, archaeological evidence points to this being the likely place. I see your skepticism and raise you a couple of levels.

But then I would encourage them to pause at the door and notice the carved crosses. What we can know for sure, I tell them, is that the global, ecumenical Christian community has for centuries identified this as the spot. First-time visitors to holy sites, even those confident in the truth of their faith, always ask the question of veracity: is this really the place? The many carvings and signs throughout the ramshackle, poorly lit church tell us again and again that it is. 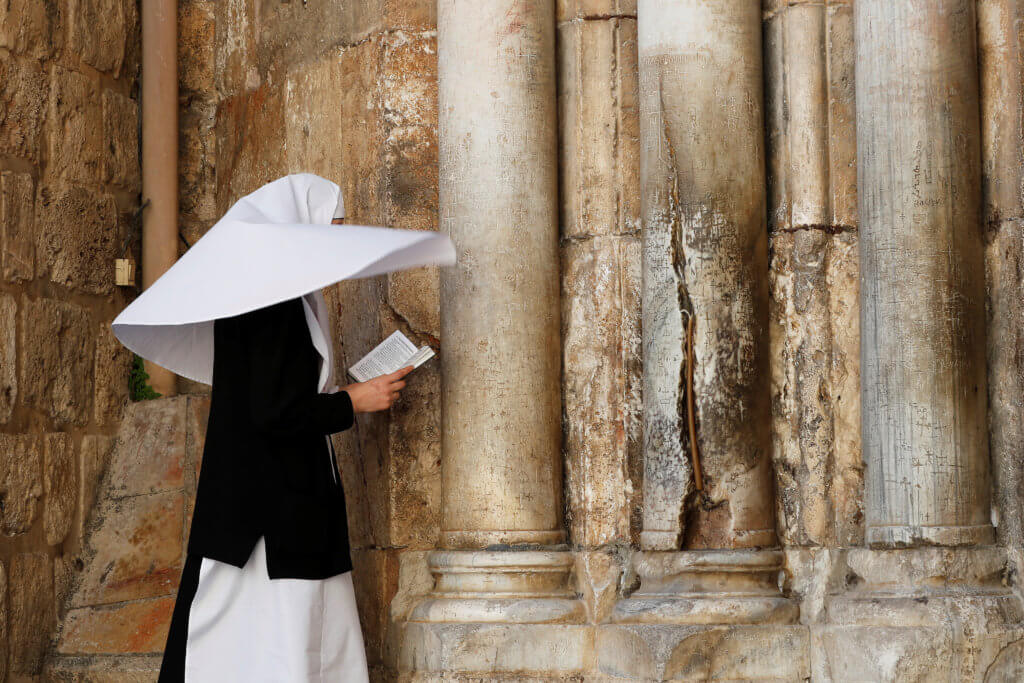 A nun prays in front of the closed front door of the Church of the Holy Sepulchre amid coronavirus restrictions in Jerusalem’s Old City March 26, 2020 (REUTERS/ Ammar Awad)

Questions of faith are related directly to questions of truth. Indeed, the question of truth stands at the center of today’s appointing reading for Good Friday (John 18:1—19:42). When Pontius Pilate interrogates Jesus about his supposed “kingdom” and Jesus claims that “Everyone who belongs to the truth listens to my voice,” Pilate’s response is as telling as it is vague: “What is truth?”

It is an oddly philosophical question in the midst of injustice and suffering. An entire field of philosophy—epistemology—is dedicated to Pilate’s question. How do we know what we claim to know? The truth of Good Friday, as I wrote at the beginning of this Holy Week, is the cross itself. There is no deeper meaning than the reality of an unjust execution, an abused and broken body, a political leader who encounters the truth but then passes the buck, washing his hands of the matter, taking the easy way out.

Just as it did for Jesus, today’s struggles with the nature of truth have life and death consequences. The COVID-19 coronavirus crisis has made those consequences clear.

For several years now, we have heard warnings about the deterioration of truth. In 2018, the RAND Corporation announced its intention to track and study what it called “Truth Decay” in American society. Back in 2005, Stephen Colbert introduced America to his concept of “truthiness,” when truth is asserted without reference to logic or fact.

The deterioration of truth is no joke, even if comedians are our most effective public philosophers. While postmodern philosophy and theology have long recognized that “objective truth” is beyond human grasp, truth decay results from intentional manipulations of that human limitation by those holding or seeking power. These manipulations harm the cohesion and order of Civil Society and undermine the common good.

We are living in the midst of maximum “truth decay.” Whether it is the Market Economy’s warping of truth to protect tobacco and fossil fuel industries or the Political State’s promotion of “alternative facts” and spurious accusations of “fake news,” the result has been a fragmentation of common life. This intellectual colonization of Civil Society by the Market and Political Spheres has left us with little common comprehension of our world.

That’s All Well and Good, Until …

This entire system of compromised truth and a fragmented information landscape was well known and largely ignored by most Americans. Daily life was relatively untouched. Everything was okay … until the COVID-19 crisis hit.

Holy Week is an opportunity to tell the truth about God and about ourselves. In a week of repentance, betrayal, suffering and death—culminating in but not rushing toward Easter—the cold, hard truth of direct experience dismisses narratives like dust. While some drag us toward optimism, we know what we are seeing and hearing and feeling.

Although we never surrender hope, cannot minimize the present pain. This week, for the United States, and for Italy and Spain, has been one long, multi-day Good Friday. It is suffering, and it is filled with inequity and injustice.

There are many parallels between the present crisis and the 1918–1919 global influenza pandemic. Although that strain of influenza likely emerged in Kansas, why is it often called the “Spanish Flu”? Emergency physician and author Jeremy Brown, being interviewed on the NPR podcast “Throughline” provided some historical background. “It was widely reported in newspapers in Spain and that is where the first stories broke of this disease.” Why? “There was a tacit agreement between the governments of the western powers and the newspaper editors not to report bad news.” Spain was a neutral country and wasn’t part of this pact to share good news alone. Manipulated optimism is deadly when unvarnished information saves lives.

Some have referenced this phrase from the HBO miniseries Chernobyl, documenting the Russian response to the 1986 nuclear disaster: “When the truth offends, we lie and lie until we can no longer remember that it is even there, but it is still there. Every lie we tell incurs a debt to the truth. Sooner or later, that debt is paid.” The quote continues: “The real danger is that if we hear enough lies, then we no longer recognize the truth at all. What can we do then? What else is left than to abandon the hope of truth and content ourselves with stories?”

COVID-19 will change our society. I hope that it will make us less accepting of political narratives designed to manufacture acceptance of inequity and injustice, to make us less contented with stories. Perhaps we will be motivated to more fully live into Thomas Jefferson’s vision of an informed populace exercising its authority and power: “Wherever the people are well informed they can be trusted with their own government; that whenever things get so far wrong as to attract their notice, they may be relied on to set them to rights.”

Holy Week, including Easter morning, is about telling the truth about suffering and death. When the women went to the tomb, they did NOT expect to experience what they found. As far as they knew, Jesus was still dead.

The truth is also that we—together as a collective—will get through this. The truth is that these experiences will change each of us as they will change the world. We will never forget this pandemic—the fear it has caused and the systems that have failed, but also the tremendous good we have seen from neighbors, local governmental officials, selfless health professionals, and all manner of workers we now realize are essential.

We thus pause at the door of the Church of the Resurrection, remembering all who were here before, who lingered at the entrance of the Tomb. Thus, we consciously join that Communion of Saints who have seen all manner of trauma, pain, and grief while pointing us toward glimpses of the beloved community. Thus, we take heart in the faithful acts of those who fearlessly approach what we know will be an empty tomb.