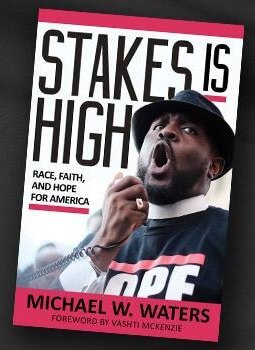 Dr. Michael W. Waters, author and founding pastor of Joy Tabernacle A.M.E. Church in Dallas, will discuss Stakes Is High: Race, Faith, and Hope for America. Dr. Waters is a sought-after speaker, community leader, and social commentator. He has received numerous awards and was listed among the Dallas Business Journal’s 2015 “40 Under 40.”

From the press release:

Those words are from the book Stakes Is High: Race, Faith and Hope for America, and they are powerful words indeed. The book’s author, the Rev. Dr. Michael W. Waters, will bring his message of hope and empowerment in the realm of social justice to King of Glory Lutheran Church’s GUSTO! program at 10 a.m. on Monday, May 14.

Waters is an award-winning author, community leader and social commentator. He is founding pastor of Joy Tabernacle A.M.E. Church and an adjunct professor at Southern Methodist University’s Perkins School of Theology. He is well known in Dallas and across the country for speaking out on current issues such as diversity, ethical leadership, race, religion and even hip hop culture. His words of hope and empowerment have inspired national and international audiences.

Waters was a Dallas Business Journal 40 Under 40 honoree and received SMU’s Distinguished Alumni Emerging Leader award, the university’s highest honor, both in 2015. He holds bachelor’s, master’s and doctoral degrees from SMU. In 2016 he received the Dallas-Fort Worth Chapter of the Council on American-Islamic Relations’ Community Leader of the Year award. He has been featured in EBONY magazine among America’s emerging leaders and has appeared on national TV and in the press. Recent commentaries have been published in The Dallas Morning News. Waters’ book Stakes Is High contains narratives of racial violence and offers ways people can live out their faith for the cause of social justice. Sojourners magazine, shortly after the book’s release in 2017, wrote that “Michael W. Waters…is both blunt and lyrical as he meditates on police violence, racism, hip-hop, and the power of faith.” The book will be available for purchase and author signing following the meeting.

Stakes Is High earned the Wilbur Award at the April 2018 conference of the Religion Communicators Council. Wilbur Awards are given to promote and encourage excellence in the communication of religious faith and positive values through a variety of secular media. Waters first book, Freestyle: Reflections on Faith, Family, Justice, and Pop Culture, was published in 2014. In it Waters confronts issues within the urban community such as addiction, education, incarceration, family issues and absentee fathers. His latest book, For Beautiful Black Boys Who Believe in a Better World, is soon to be released.

Excerpt from Stakes Is High: Race, Faith, and Hope for America | In this collection of columns written originally for The Huffington Post, the Rev. Michael W. Waters offers stories from the front lines and offers ways that he and others can live out their faith for the cause of social justice.

Good God Episode #3: Reverend Michael Waters | George Mason and Michael W. Waters of Joy Tabernacle AME Church discuss economic justice, poverty, race relations in Dallas and America, and how we can address it with our faith.